LeBron, the Knicks, the Nets, and the Red Pill

The only thing Chris needs more than a glass of water is a working Internet connection. He doesn’t even need a minute to think this over. Say the word, chart the King’s path for New Jersey, and he’s ready to make the switch. After years of frustration in the best of times and something beyond despair in the worst of them, he’s looking at the Knicks and he feels nothing at all. The Church of Anthony Mason has been destroyed. For the first time, he sees this: 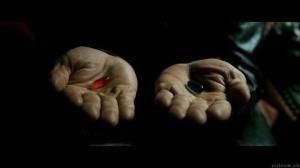 Starting tomorrow, Chris will be clicking between two websites: Twitter, which is sure to break news of LeBron James’ eventual destination faster than any other site, and the New Jersey Nets’ official website. The season tickets page, to be exact. If LeBron jumps, so will he, and that will be the end of it.

It’s hard for me to say how much Chris loved the Knicks growing up; I didn’t know him until eight years ago, when the team was already corkscrewing to the bottom of a terrible conference. The Nets were ascendant then, but that made no difference to him. The Knicks were bad, but to him and many others, still: StarksMasonEwingEwingEwing, and FUCK Charles Smith, but not as much as Michael Jordan, no player as much as Michael Jordan, not then or not ever, but Jimmy Dolan on the other hand…

He watched and waited and watched and waited, and good God, he watched. He watched the Knicks on television, compulsively. He was an addict in search of that first, glorious high, creepingly aware that it was never coming back but digging in his heels—and his butt into his couch—anyway. The definition of addiction, and the definition of insanity. Still, they were his Knicks, and nothing could change that…

Until 2004, Chris was a Yankees fan. The A-Rod trade turned him off to the team altogether, and he swiftly made the switch to the Mets. To this day, I’ve never heard any echoes of his joy at 1996 or subsequent titles. Maybe he keeps them to himself, but his love for the Yankees seems dead, a small fire snuffed out by a Category 5 hurricane.

For the Knicks, Hurricane Isiah finally started pushing people to the brink. Not Chris. He kept watching. StarksMasonEwingEwingEwing. FUCK Charles… eh, I guess he’s no Isiah. And FUCK Michael… eh, why bother? Chris didn’t let go of his grip completely, he just loosened it, but the storm kept coming.

Now the Nets are definitely coming to Brooklyn, where Chris grew up, and the Knicks, having ostensibly planned for this offseason for three years, look as clueless as they did when they started. Not only that, Chris is convinced that LeBron is signing with the Nets. He is convinced that LeBron’s mind has long been made up to come to New York, but that he, like Chris, sees a team that died 10 years ago. The fire still burned for Chris, surviving every Category 5 hurricane James Dolan threw at him, but why would it for LeBron?

There is, technically, no Category 6 hurricane. That’s what James would be. He’s already a prototype of something we haven’t seen before. Category 6. Category number 6. For Chris, he’s the hope to extinguish the smoldering wreckage of what was and will always be his favorite era in any sport, ever. Starks, the little engine that did. Mason, the man on whom he has modeled a not-insignificant part of his life (Chris’ love for Mase is pathological, admirable, scary). Ewing, the original spark of hope. Ewing, the key to it all. Ewing, the symbol of all that could have been, a monument to the past.

If the storm comes, it’ll fill thousands of glasses of water. The blue pills keep fans looking backward. The red pill pushes them forward—”the only direction”—and that’s why Chris has chosen it. But he’s no longer looking to the sky for his water to wash it down. He’s already taken it and, that’s why for the first time in a decade, he’s ready to enjoy whatever comes next.