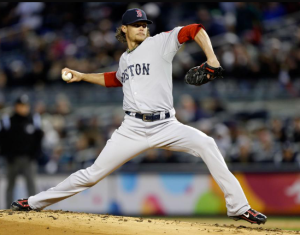 Clay Buchholz’ nightmare goes something like this: There’s a man on first base. After four pickoff throws, Clay finally nails him, and there’s a small celebration, and he looks back over, and the runner’s still there. For all the talk about Clay’s shortened time between pitches this offseason, he’s still crazed by runners at the cold corner. That’s fine, if he can repeat what he did last night — 7 innings, 1 run — for the season. Just don’t tell me it’s a new guy. We’ve seen this show before, and it’s a good show.

The Yankees lost the game when Hiroki Kuroda took a liner off the fingertip, and crawled back into it in the eighth inning when they cut a six-run deficit in half, thanks to Vernon Wells’ three-run homer off Alfredo Aceves, a guy who probably thought Heath Ledger’s Joker was too predictable. The Ace of Chaos’ mess was nothing Joel Hanrahan couldn’t nicely clean up, and the game that will forever be known for the first of Jackie Bradley’s 5,000 hits ended like you finish an ice cream sundae, having saved the cherry for the end. The Sox still haven’t hit a home run this season, but it doesn’t matter when nearly everyone comes to mash. It helps when you’re playing the Yankees’ MASH unit, but a win’s a win, and if the Yanks are going to let Jose “American League for Rey Ordonez” Iglesias hit .600 in the Bronx, that’s not a good sign. Iglesias doesn’t like the cold, by the way, and looked like a human peapod out there, albeit one with the range of Daniel Day-Lewis, or a soprano, or whatever metaphor you want to use. Dude gets to balls, as does Bradley, whose defense Baseball Prospectus nailed:

He doesn’t possess otherworldly speed, but his instincts are so good that the end-product would be above-average in the majors right now.

For the second game in a row, he tracked down what looked like a potential warm-air homer without huffing and puffing his way there; he just sort of materialized under the ball before bringing down as gingerly as catching an egg. Honeymoon periods always end, but they sure are fun while they last.

Fearless prediction for tonight’s game: Jonny Gomes blasts the first homer of the season, and I win my poker game.

I mash up some low-hanging fruit over at le Classical.

Here you go: Talkin’ About The Dog

Last Exit is doing a (shhh) Animals issue coming up, and ya boy got all exciting and ripped off a column about his dog. Then he had a much better (secret) idea, and we’re going with that. As I’ve been delinquent, here’s my ode to youth and Chickens. We never gave it a headline, so I’ll give it my pretentious one

Since I got cable television, I’ve been watching a log of the Dog Whisperer, the National Geographic show where the host has an incredible ability to alter the behavior of dogs, old or otherwise. The host, Cesar Milan, constantly excoriates lazy dog owners for anthropomorphism; when the owners treat their dogs as human, the dogs act like greedy humans would, and take physical ownership of the coach, carseat, house, whatever. A careless owner is liable to be following the whims of an angry Chihuahua, rather than dictating rules to the six-pound mammal. The key is to treat a dog like a dog — that is, a lesser species — which is a lot more revolutionary than it sounds.

All this has me thinking back to my childhood, and our childhood dog, whose behavior was nothing short of astonishingly poor-mannered. Charlie was a Tibetan Spaniel, which looks like a plus-sized lapdog, and he was protective of the front door, only a handful of times to the point of biting. Charlie, growing up mostly with my brothers and I while my mom was at work, lived a complacent life, to say the least. He slunk around the house while played video games, street hockey or watched after-school cartoons and only responded to commands that indicated he was about to go outside or eat. I made a point of never feeding him, because the canned food absolutely repulsed me, and technically he belonged to my brother. Still, my mom fed him most of all, which must have been weird for them because even the dog knew that my mom absolutely detested him. She loved that her kids liked the dog, but as she was the one that cleaned up after him, I think she resented him — and I’m talking on a personal level — for shedding and occasionally pooping in the house. Whatever it was, he slunk in her presence, and was never deferential to anyone else. We may have treated him like the fourth brother, but she treated him like a no-good, freeloading cousin.

The dog was a highlight for all my friends who came over, just for his distinctly entitled ways. He’d got up to people he trusted and roll over on his back, exposing his tummy to them in way that say “RUB IT NOW,” and even if you did, he might just get up and leave in two minutes. It was feline behavior; cats bother me, but coming from Charlie, it was hilarious. He had a Napoleon complex. He also had about 100 nicknames, Chickens being the most popular and apropos of mostly nothing, and he would respond to all of them if you had the right inflection of your voice. Just like everyone else in the house, he loved everyone but had a funny way of showing it. People often say dogs “smile,” but you’d be hard pressed to find an occasion where Charlie was accused of it. His entire life was spent on a small L.L. Bean bed, angling for biscuits or hightailing it on the rare occasion where we tried to give him an outdoor bath.

Eventually I moved away and, years later, Charlie died at the old age of “15 or so.” We don’t have an exact date because the friend who gave him to us had found him in a Boston park as a puppy. What I do know is that should I ever have another dog, I’ll have a much better idea about how to treat it, thanks to both the Dog Whisperer and the sandpaper-like effect of old age. I’ll smooth that dog out if I have to do it one small bit at a time. Charlie had it easy. He was our friend. But he was a great friend to have.