Around the bases Thursday 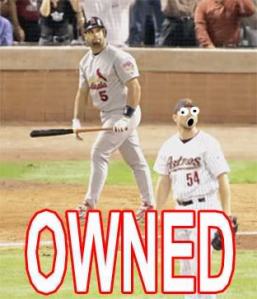 1. FIRST BASE: BAD BRAD Are the Phillies in trouble? They’re going to make the playoffs, but Brad Lidge blew his 11th save last night, painting a scary picture for their possible first-round matchup with the Rockies. After last year’s perfect-for-the-season performance, Lidge’s woes look prohibitive heading into October, but should they?

Absolutely. Often, saves are a misleading window into a player’s skill level; take Brad Lidge, last year. Was he a great closer? Yes. Was he lucky to save all of his games? Absolutely. The “perfect” season was a mirage, but his numbers backed up the performance of a great pitcher. This year, it’s not that the bounces have gone the wrong way, it’s that the bounces have gone almost exactly as expected. He’s striking far fewer people out, walking more, and, most alarmingly, giving up home runs at a prodigious rate. There’s no mirage here. This is bad.

2. SECOND BASE: BAD BRADLEY Milton Bradley has been suspended by the Cubs for the season, giving credence to everyone, everywhere who said this would work out poorly. The oft-maligned Bradley has been something of a lightning rod for stat-conscious pundits and baseball men for years; he is, without question, a talented baseball player. Former Dodgers GM Paul DePodesta once said that if he could have nine Milton Bradleys, he’d take them—saying something like that would show why DePodesta, one of the sharpest analytical minds in the game, no longer has that job. Milton Bradley is where the stats and reality meet, and very rarely does it work out well for him. He’s just good enough to get passed around to people who think they can either keep him under control or let him blosssom, and it never works out. Playing in the interactive Wrigley Field, with a firecracker manager in Lou Piniella, was one of those situations that was too bad to be true from the very beginning. Turns out that one Milton Bradley is often too many.

3. THIRD BASE: WELKS BACK Wes Welker will apparently play this week versus the Falcons, which is good news for the Patriots. While they were helped by Some Dude Named Julian Edelman in their loss to the Jets, Welker needs to be on the field for the Pats’ offense to run at full steam, or as close to it as it can go at the moment. Tom Brady recently said “it’s not called mid-season form for nothing;” which was, all in all, refreshing. Two years ago, the Patriots came out determined to beat the snot out of the Jets thanks to the Mangini departure scandal; SpyGate erupted as a result of that very game, and then they were determined to crush everybody. They were possibly the best football team in history for the first nine games, but from Week 10 until the Super Bowl, they were a very good, very tired football team. It’s a balancing act to grow into the team you’re going to become, but it is a process to be minded. They didn’t mind it in 2007 so much as they ignored it, and they almost got away with it. One might say karma got them, or bad luck, or that they were simply the worse team by the time the Super Bowl ran around. What’s for certain is that there was no talk of rounding into mid-season form after Week 2. It has to happen quick, but it’s a healthy attitude. No need to panic yeat.

4. HOME: NFL STUFF COMING LATER The NFL Week 2.5 report comes out later today with a look at courage. Be courageous, and return.

Filed Under: Uncategorized
Tags: around the bases