A broken clock is, famously, right twice per day. Similarly, if I forget that I live in NEW YORK CITY during my commute, on the weekend, even when I see people peeing in public on the regs, there will be a couple things each day that remind me of what happens when this many people are crunched into this small of a space.

Take Eddie V. Eddie V. is a sales associate at a local Halloween store, which I visited for work today. I had some questions about Halloween trends, and he was eager to answer them. His brother, after all, owned the entire company, so I came to the right person! (I was told.) I asked him how to spell his name, and he told me. At the same time, he reached for his business card. Not uncommon when people want to make sure their names are spelled correctly, and his last name is alphabet runoff. Only the business card didn’t have his last name: 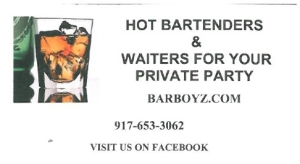 I DO work in Chelsea. Everyone here has their hustle, and I begrudge no one for trying, so I just kept asking about costumes, and he kept answering. (I didn’t see the web address until after, besides.)

Anyhow, did I know that his brother was second in line at the company for CEO? I hadn’t, because I had just been told he WAS CEO, but I didn’t mention it. I just asked whether he expected the store to get busier over the next week. He said that he did, but that he wouldn’t be there tomorrow or Thursday because his father had died yesterday and him and his brother had to attend the funeral. Makeup was a really big seller too, he added.

I thanked him for his time, offered my condolences, and walked away, and he seemed upset. He really liked talking about costumes.