In defense of Nate 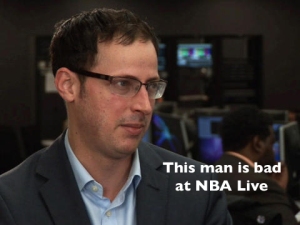 Unskew me if you want. Maybe I’d feel differently about Nate Silver had he not lived in the dorm room next to mine at college, and we hadn’t played computer trivia night after night in his almost artistically messy room. Maybe I’d feel differently if, when I noted that the 1997 or theneabouts Red Sox, at something like 10-4, were the “best team in the league,” Nate hadn’t shot back with “Just because they have the best record doesn’t mean they’re the best team,” a retort that cut down my life plan to create and sell sports narratives to its quick, and pointed me toward things that mattered. And maybe I’d feel differently if he hadn’t, more than a decade later, uprooted himself from Chicago only to land five blocks away, the perfect distance for us to catch big college football and pro basketball games in the extremely rare event he’s not working. All of those things happened, and if they hadn’t, maybe I’d be critical of him, likely out of envy, given my extreme gift for pettiness.

We’ll never know, though, the same way we’ll never know what would happen if Barack Obama and Mitt Romney faced each other 100 times, on 100 different election days, with 100 different weather systems moving in and 100 different mixes of poll workers. We can only work with what we’ve got, and I can only work with what I’ve got. Nate hardly needs my help, as he’s been wonderfully defended by Deadspin’s David Roher and Gawker’s Mobutu Sese Seko among many, many others. But I feel compelled to defend him, given my unique position. The attacks on him won’t stop until the election is over, and there is actually data to play with, no matter how eloquent those saving him from ad hominem parries are—the whole point of ad hominem attacks is that they’re illogical and impossible to defend against. The criticisms of Nate that center around his the machine he’s created, and make him part of the machine, by extension, couldn’t be farther from the truth. Nate’s not a machine. He’s a regular dude who works really hard and takes a ton of pride in his work, a guy who started two small businesses by himself because he thought he could help people understand baseball and politics better.

When Joe Scarborough purports to speak for the Obama campaign, saying that they believe they have only a 50.1 percent chance of winning the election, he’s conflating feelings with data, but even these feelings are represented in Nate’s work — all you need to do is check the “Popular Vote” column on FiveThirtyEight, which has listed Obama around there pretty much since Mitt vanquished the last of his 361 challengers. When Reuters/Ipsos calls the race “tied,” they’re doing national polls, and then you get the amazing pirouette of right-leaning commentators arguing against a state-by-state solution to the mess of sorting the signal from the noise. Small businesses are the answer to all of our problems, they say, right up until they start asking who you’re going to vote for.

You probably won’t be shocked to know that the Nate issue has nothing to do with Nate and has everything to do with the campaigns. The Obama campaign is the most amazingly well-run political operation we’ve ever seen, to the point we’ve hardly seen it. The horse-race aspect of the campaign wouldn’t exist if they didn’t want it to. Future Democratic politics are going to be screwed if they can’t summon the enthusiasm that gets people involved and keeps them around during politically challenging times — Obama’s exceptionalism in this department has been almost completely overlooked. They never left Ohio. They knew to create real change, which Obama campaigned on, they needed to govern for eight years. They created a plan to do that, which they have been executing with precision and in almost total national silence. Nate’s model has the audacity to find and acknowledge this signal. As Ezra Klein writes in so many words, this sort of data parsing is pretty much precisely what Mitt Romney has been doing his whole life. A better model to question than Nate’s could be Romney’s, where the data tells us he’s trailing, yet he more or less treated the final debate as if he was the incumbent instead of the challenger in a race where it is all but conceded that the challenger will have some sort of advantage. If Obama can get people to the polls and muster any of the enthusiasm he mustered in 2008 by running against an old order, instead of representing an entrenched one, that ought to work in his favor, and Romney’s strategy seems to ultimately concede both of these points to him. The only way Nate is wrong is if Romney has created an even less visible mobilization effort in Ohio, one that his model has missed. His projections say there’s a 20 percent change of that being the case. It seems pretty straightforward.

What I’ve never understood about Nate is his patience for showing his work. The people criticizing him now may or may not realize it, but Nate loves his work more than they hate it and then he can, mystifyingly, come by the bar (late, as usual) and drink some beers, as normal a dude has you’ll find in this city. The type of person who gets their news from Morning Joe should think the election’s too close to call. I’m not saying that Morning Joe goes out of its way to misinform, but the near-defining quality of television “personalities” is that they have swapped talking for learning. They are brought onto television for what they already know, and they are paid to respond to news events on-air more or less in real time. This is true across networks and ideologies, and is a law defined by its exceptions, notably Chris Hayes and the great Rachel Maddow, who does every night in real life what the bumbling, self-important retreads on The Newsroom can’t even manage in fiction.

But I’m straying fromt the point. The point is that Nate Silver has no hidden agenda, unless it’s getting out of work early to try the new Oktoberfest beers. If you really want to see Nate fail, don’t ask him to predict an election. That’s what he can do really well. Ask him to pull himself away from it, and to meet you 10. When he starts showing up on time, that’s when I’ll start worrying.