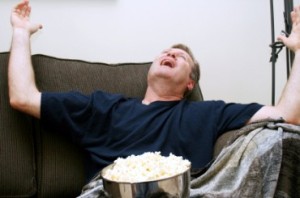 WHAT I’VE LEARNED BY WATCHING

1. HOUSTON STINKS There was more talk this year that the Texans would be a suprise team, but they looked listless in week one against the Jets. They couldn’t do a thing against the Jets, which has been attributed largely to the Jets’ defense. I wouldn’t be so quick to put all the credit there. It takes hard work for a team to look as bad as Houston did against the Jets — it wasn’t like they were missing opportunities, they just weren’t making any. And this was in week one, where they had months to prepare. If the coaching staff can’t find a way to get a single good drive going with what is supposed to be a talented offense at the outset of the season, here’s betting they can’t scheme up much for the rest of the year. You can forget about them. Texans: written off

2. MARK SANCHEZ IS GOING TO BE GOOD My lack of love for the Texans doesn’t cast any shadow on Mark Sanchez’ performance as Jets’ QB. As has been noted elsewhere, Sanchez’ footwork already puts him far ahead of most NFL quarterbacks in that department and at near-peak Brady levels (the best I’ve ever seen, and the one skill category in which Brady is, I think, unquestionably dominant). He didn’t get a chance to read defenses yet, or deal with pocket pressure, but it appears he’s got all the tools to succeed. Sanchez’ development marks something of a barometer for the NFL-readiness of USC QBs after the Carson Palmer and Matt Leinart experiments. It’s my contention that he’s NFL-ready, but others don’t think so, as baby-buddy-of-blog “Cleveland Frowns” disagrees, and we duked it out in the comments. Will the experiment look as good in week two against a banged-up—but still Belichick-schemed—unit? Highly, highly doubtful. But we’re looking long-term and buying.

3. EITHER THE PATRIOTS LINE STINKS, BUFFALO’S D-LINE IS GREAT, OR BOTH Tom Brady got the least amount of time to throw the ball against Buffalo since, well, the last full game he played (the one were Osi Umenyiora lined up in his ass). The Bills got an amazing amount of push and shut down the Pats’ running game completely. Does this mean we’re going to see a full-fledged Brady-slinging game against the Jets? Maybe not. But maybe. We’re working toward that point, and when the offense went ballistic at the end of the game, the Bills had no answer. Ben Watson’s winning catch was bananas, by the way.

4. THE QBS? FINE Trent Edwards looked pretty damn good in the fast offense; we’ll see how much of it was Pats-D related when the Bills (blech) take on the Bucs (BLECH) this week (kill me). Brady’s a little tentative, and might never hit 2007 form again, but if he’s at 80 percent of that it’s plenty good enough. Actual exchange after the fumble with fashion-language-understanding and unhelmeted-Brady-loving girlfriend.

Her: Is that good?

Me: Yes, they’re going to get a touchdown now and win.

Her: How do you know that?

Me: It’s why Tom Brady is married to Gisele.

Verdict: Brady is a good man

5. THE GIANTS AND THE REDSKINS BLAH One of the dedicated readers of this blog is a Giants season ticket holder. I applaud his enthusiasm. Maybe I’ll share it some day. It’s unlikely. The Giants sure seem to rough teams up, but without Plaxico, it seems like they have that oh so little weakness of Eli’s habit of not quite throwing it to the right place. Osi is scary, good, though: I said after Super Bowl XLII that it might look like less of an upset once Osi and Strahan were both in the HOF, the same way the Rams/Pats Super Bowl result looks completely in retrospect. Not enough attention is paid, btw, to the similarities to those two seasons, down to the earlier, fingernail-close meeting in the season, the 14-point spread, and the miracle last drive. Verdict: I don’t want to talk about this any more, but before I go, the Redskins could compete if they had an offense. Still better than the Texans.

6. I THOUGHT THESE TEAMS WERE GOOD Watching Bears/Packers was like getting hit in the face by errant footballs. I thought these teams were supposed to be good, and maybe they are, just well-matched. But that game was shit. And I could give a crap about the “rivalry,” just like everyone in Chicago. Trust me, they don’t give a lick about beating the Packers more than any other team. They just want to win the Super Bowl. That’s no crime. But to force some East Coast-style rivalry on it just isn’t going to work. Verdict: we’ll know more after this week

7. OOPS I ALMOST FORGOT Steelers/Titans and Chargers/Raiders. That happened. I had four Simpler Times lagers. There was a lot of hitting. I was bored, but I know these teams are good. They’re annoying too.

Picks for this week: Each week, I submit to you my picks in the Cheddar Bay Invitational Picking tournament on Cleveland Frowns. Must pick six games vs. the spread, at least one of which is an NCAA game, and have a 100 word essay accompanying a pick. Here’s this week’s entry.

Essay: I’m not confident the Patriots are going to cover against the Jets. But this one seems a bit easy, no? The Pats are 1-9 in their last 10 games ATS, came off a miracle win (and not even near cover) against the Bills at home, and the Jets convincingly thumped the Texans, a popular pick to improve this year. As a result, the Pats/Jets line is dropping downward, but should it? I think it’s more likely that the pundits were wrong about the Texans, and the Jets exploited a bad team, than the opposite, given the results. And I think talk about the Pats’ defense’s demise, while certainly noteworthy, may not be as relevant in this game. Mark Sanchez is going to see things on Sunday he’s never seen in his life, and I think it’s more likely than not that the Pats will pull out a typical AFC East slog victory over Gang Green, but by at least six points.